Williams won two Eisners this year for his work on Detective Comics. I haven't read any of his stories yet but from what I've seen it does look beautiful. All of his covers were great; I honestly could have picked any of them out. 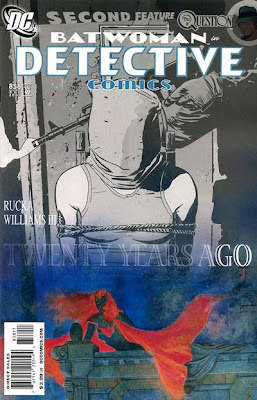 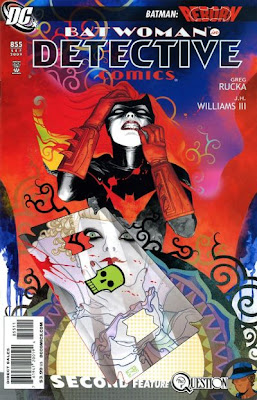 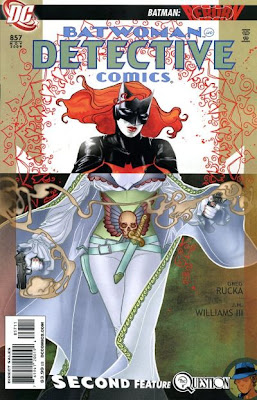 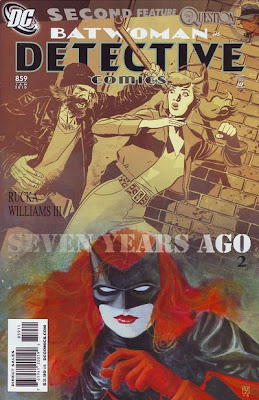 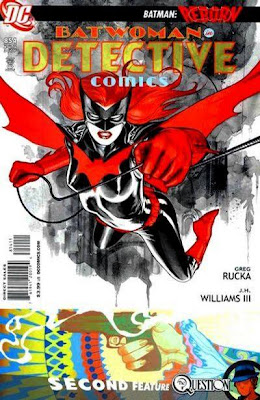 Jean's last year of winning Eisners coincides with the end of my project so I'll be getting back to normal soon. And for that last year it was all Fables for Jean which brings us back full circle. 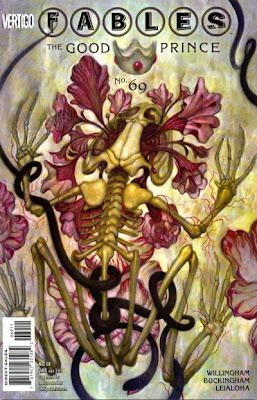 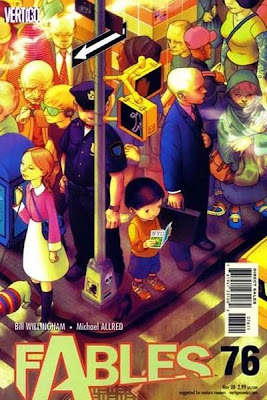 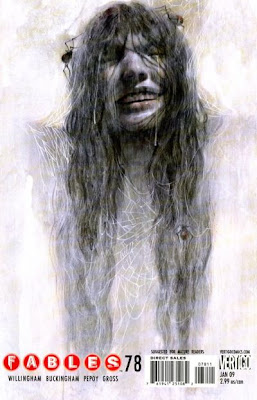 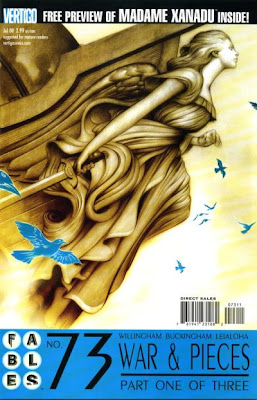 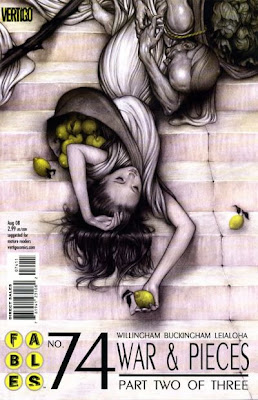 I'm still running behind as I work like crazy here's a few more covers from James Jean. That year he added The Umbrella Academy (I may have hated the series but he did make some striking covers for it), Process Recess, and Superior Showcase to his artwork. 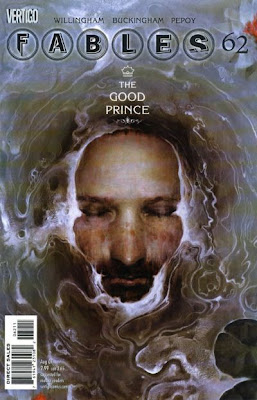 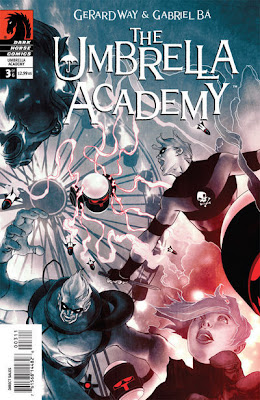 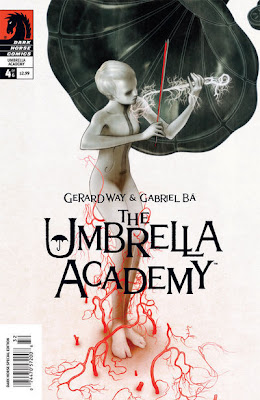 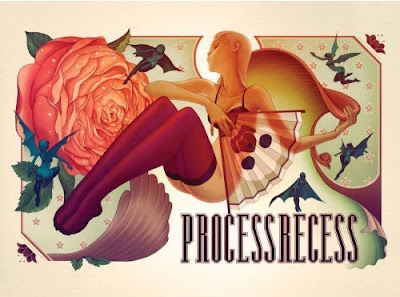 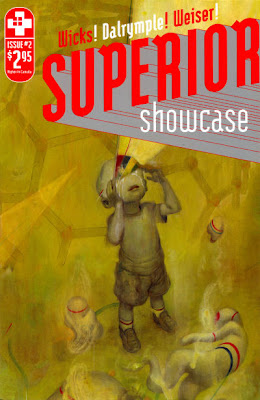 It's an interesting mix. There's stuff I have and love, stuff that I have wanted to read (I keep hearing that A Drifting Life is terrific), a couple of books that ordered this morning before the awards were announced (Asterois Polyp has been on my list to get for a long time), and a book that I hated so much that I gave it away (Scott Pilgrim).
Posted by Das Übernerd at 12:27 AM

I'm catching up to the present just in time for James Jean to miss out on his seventh consecutive Eisner for best cover artist. He isn't even nominated this year. But back to three years ago when Jean was still on his winning streak and provided cover art for two issues of Runaways along with the Fables spin-offs Jack of Fables and 1001 Nights of Snowfall.

This was also the toughest time to pick just five covers. While the Runaways covers aren't the best examples of Jean's work I wanted to include one of them. 1001 Nights of Snowfall had to be included so that was two down. And then everything else is terrific. What do I slight by picking out something else? I chose the two Fables covers because they're a matched set and consequently have an extra punch to them but I could have gone with anything from that year's worth of Fables or Jack of Fables covers. 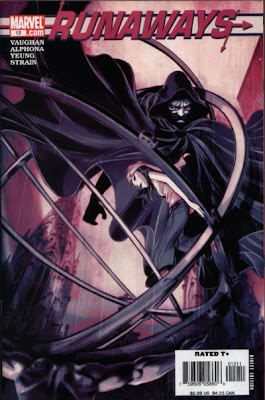 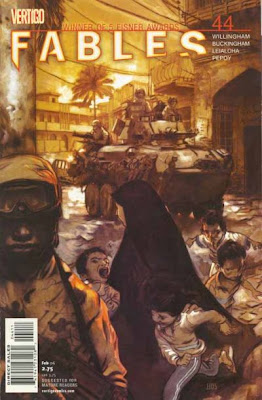 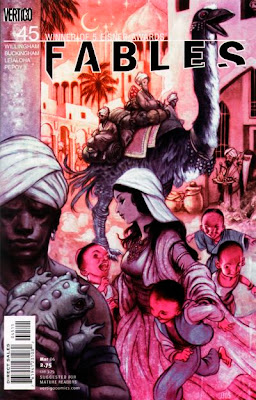 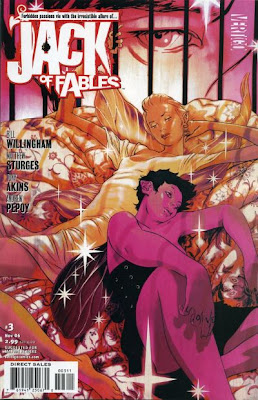 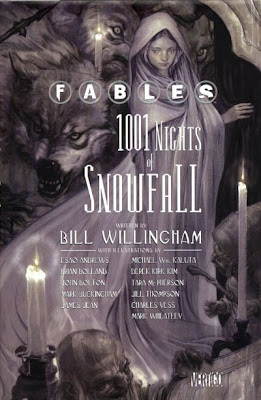 Review - The Life and Times of Scrooge McDuck

The real story (as opposed to the plot) of The Life and Times of Scrooge McDuck starts fifty years before the comic was published. Carl Barks was writing and drawing Donald Duck comics and in one story he introduced Donald's miserly Uncle Scrooge. It turned out that Uncle Scrooge was popular. Very popular. Popular enough that he got his own comic which outsold any of the other Disney themed comics and was a world wide sensation. Scrooge made his three cubic acres of cash by "being tougher than toughies and smarter than the smarties" and had globe trotting adventures. Barks often dropped references to the tough road that Scrooge had to making his fortune.

Fifty years later and Don Rosa attempted to assemble as many of those references to tell the story of the rise of Scrooge McDuck. Starting from his ancestral home in Scotland, Scrooge makes one American dime for his first day's labor. From that tiny seed a fortune grows as he takes the dime as an omen that he should go to America to find his fortune. Each issue takes the reader through one complete adventure that he had in the late nineteenth century. He captains a riverboat, drives cattle, and hunts for gold all over the world before finally striking it rich. Scrooge's life made him hard, though, and upon making his fortune he drives his family away.

Obviously Rosa has created his story as a massive tribute to Barks. The Life and Times of Scrooge McDuck is peppered with references to old stories, characters that haven't been used in decades, and the flotsom that accumulates when a comic creator is just trying to make good stories about cartoon ducks each month without worrying about how it all fits together. What Rosa does with it is tell other stories using those same elements. Barks told the story about a lender who claimed Scrooge owed him fifty years of interest on a loan at 100% compounded monthly. Rosa takes that story and tells the story of why Scrooge got the loan from him and how it was originally repaid even though the loan shark made it difficult.

Occasionally Rosa does dip into the obscure. Scrooge hiding some stocks in a bottle embedded in a wall is a plot point for an old story but here it's just confusing why we need to see that at all. However in most of these instances it's coupled with a new joke or bit of storytelling that allows it to be enjoyed by anyone. And such direct references outside of the context of Rosa's story tend to be rare.

The story works because at its heart it is a very traditional narrative. This is a rags to riches tale where the protagonist learns a lot of hard lessons before he succeeds through his own hard work. And the changes that he undergoes as a result leave him marked. It gives the story an emotional edge that is surprisingly effective given how anyone familiar with the characters at all know exactly how it will end up.

The best way to describe Rosa's art is animated. The characters have their roots in Disney animation so this is natural and Rosa gets that sense of motion right. He packs the panels with detail that you don't usually find in such a cartoony style and his sight gags are all sharp. This was a good book to look at as well as read.

Rosa has always lived in Barks's shadow. Carl Barks was the man who made these comics an international sensation (they're still huge in Europe) and Rosa is the modern cartoonist who has to live up to that. Doing a year long story as an homage to Barks is part of that. But it is a very good story, one would have fit in nicely with the best that Barks himself did. Now if only someone would reprint The Carl Barks Library so I could have Rosa and Barks side by side on my shelf.
Posted by Das Übernerd at 6:44 PM

Review - Sin City: A Dame to Kill For

Sin City: A Dame to Kill For
by Frank Miller
1995 Eisner Winner for Best Limited Series

I'm going to be coming back to Sin City frequently for now since it won eight Eisners across five completely different stories and I recently purchased a full set of the stories. The last time I read them was when the books were new and my younger self found the stories to be totally awesome. Today I still find them infused with a kind of pulp chic but with fifteen years of hindsight I am also filtering them through the perspective of Miller's downward spiral and his fetishes. A reader not familiar with its context wouldn't notice anything odd about A Dame to Kill For; I wound up saying to myself, "More ninjas, prostitutes, and ninja prostitutes?"

Dwight is a photographer who ruined his life with drink. He's been working to improve his life but he still fears losing control. Dwight's been reduced to photographing philandering husbands to make the rent. Ava was his lover but left Dwight for a rich man. She contacts Dwight and tells him that she fears her husband's S&M sex games are escalating to the point that her life is in danger. Dwight starts to look out for her and finds himself pulled back into a destructive relationship with Ava.

I know this is a personal reaction but reading A Dame to Kill For again made me think, "Yes, this was when Frank Miller started going off the rails." The initial chapter is is a good example of this. It's almost completely extraneous since all of the character establishment gets repeated in the next chapter anyway. It exists almost entirely for a very long scene in which a man handcuffs a prostitute to a bed and then gets his money's worth. Our hero Frank... er... Dwight has to save her from a bad situation that follows and she has a heart of gold just like the many, many other prostitutes in the story. In isolation of just this story it's part of the gritty Sin City setting; in context it looks a lot more like the author's fetishes put on display.

And that continues through the whole book. There's a theme of masochistic sex that dominates the book. This is a story about people hurting themselves (intentionally or otherwise) for sex. I'm wavering back and forth on how sensationalized it was against how it was used as an intentional theme and that says to me that Miller did use it well. Sin City is firmly attached to its pulp roots and sensationalistic is exactly how to connect to them. Being able to convey that theme of sex and pain so that it comes through the fetishizing of it means that it has been done well.

That theme wouldn't have worked if the main cast weren't so well defined. Dwight, Ava, and most of the rest of the major cast are pulled into destructive orbits and the reader gets a front row seat to that. It's an interesting examination of those self-inflicted wounds.

I did have a bit of a problem with the pacing of the story. Besides the almost redundant first chapter there is a long stretch toward the end of the book where the plot seems to be spinning its wheels. This was originally an eight issue miniseries but it feels like it's six issues worth of story.

It goes without saying that Miller's art is still just as nice to look at as it was in the last Sin City book. You could copy and paste my comments on that. It still features the heavy black inks with the definition in the picture provided by the white negative space. It still features the strong layouts and striking images. Even when I have problems with Miller's writing his artwork is consistently strong.

I know I'm down on A Dame to Kill For but I am going to recommend it anyway. My problems with it are mostly metatextual and without the same context what you'll have is an exciting pulp story which handles some mature themes well. It's not my favorite Sin City story but it is a good one.
Posted by Das Übernerd at 6:41 PM