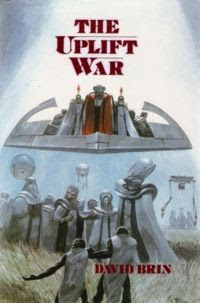 Another day, another sequel from a then hot author and once again... hey wait a second! This one is actually pretty good! Brin's The Uplift War is one of the few books where I found the sequel to be significantly better than its predecessor.

Once more Brin places his story in his Uplift universe where humanity is the underdog is a galactic civilization that is built upon the status gained from raising animals up to sentience. This time the events that are occurring in Startide Rising have caused some hostile species to move directly against humanity and their children sentients the dolphins and chimpanzees. A colony world is conquered and the governors son goes into hiding with the daughter of the ambassador of one of the few friendly alien species. They join forces with the few remaining free chimpanzees and start a guerrilla war to take back the world (don't look at me, it's Brin's pun). Unfortunately they also discover that their world holds a secret that could cause the end of humanity if it is found.

Somehow Brin took the single most cliché story possible and made it plausible. I can't say much about this since I avoid spoilers but Brin spins careful justifications for why a planet can be conquered with minimal damage and how a tiny resistance group can plausibly overthrow a completely ruthless occupational force. He spins a great adventure story out of trying to justify the space opera elements.

My problem with Startide Rising is that I could not connect with the dolphin characters that were the focus of the novel. While there are significantly less human characters (there's really only one that matters) in The Uplift War I found the chimpanzee and alien characters better written. None of them were human but their viewpoint was more understandable so when there are several chapters from stranger points of view it didn't bother me.

With the previous book I loved the concepts Brin provided for his Uplift universe but was disappointed at how little we saw them. The Uplift War gave me plenty of aliens and details on the complications for humanity in the setting. Significant portions of the book are dedicated to the invading aliens trying to hold on to the world.

The Uplift War feels like Brin read my mind and changed everything I didn't like in his previous book resulting in a wonderful book. This is an exceptional space opera and adventure story. If you've ever enjoyed either of those then you should love this book.
Posted by Das Übernerd at 6:16 PM