I'm going to be finishing off a few more categories of Hugo winners in the next week or two so I will start with the two winners for Fan Artist who I have not mentioned yet.

Something I've been struck by as I went through this is how difficult it has been to find samples of most of the fan artists' work on the Internet. Even with the recent ones I have had trouble finding anything beyond a random sampling, the occasional fanzine cover, and a mention as a con attendee. 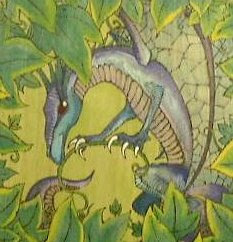 There are multiple artists by the name of Sue Mason which gave me a bit more trouble than usual in hunting her down. I did find cartoons drawn for different sources but she maintains a website for selling her custom pyrographic, wood burning, art. There's several interesting samples of her work at the site and it is worth taking a look at. 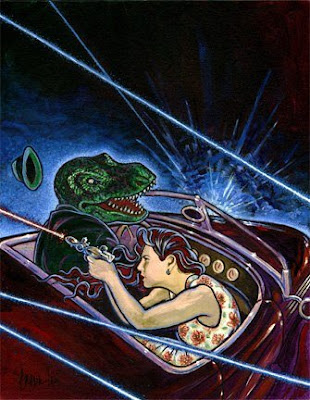 There is a very extensive gallery of Wu's work online. In addition to that there is, unlike the vast majority of fan artist, a book of his art available.
Posted by Das Übernerd at 5:03 PM 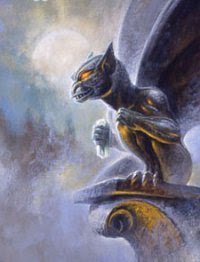 If you're curious about my nanowrimo count at the moment it stands at 30026. I'm on the downhill slope now.

In 2001 the actual novella winner was "The Ultimate Earth" which is only available in the novel Terraforming Earth. The novelette "Millennium Babies" was in the single author anthology Stories for an Enchanted Afternoon. Finally "Different Kinds of Darkness" was found in the massive brick anthology The Hard SF Renaissance.

Like "...Where Angels Fear to Tread" before the novella "The Ultimate Earth" was printed once in a magazine and has never been collected since. It was, however, integrated into a novel. And once more since I cannot be sure of what changes were made I am briefly reviewing the entire book instead of just the section titled "The Ultimate Earth". 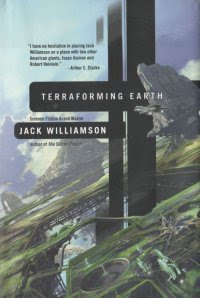 Also this is very much a tribute award. Jack Williamson published his first story in 1928 and remained active with science fiction until his death in 2006. Williamson's only previous award was a Hugo for his memoir Wonder's Child, so this was a Hugo and Nebula more for his body of work and longevity rather than the quality of the story.

Any yet Terraforming Earth wasn't bad. It started with an great premise and up to roughly a third of the way through the book I was impressed. Then the payoff didn't quite come but the book shifted to a pulpy tone that was still entertaining. Finally it concluded weakly but not terribly. The effect as a whole is disappointing but there are some things worth looking at.

In the not too distant future an eccentric billionaire devises a plan to insure the survival of the human race should an extinction event occur. He creates a base on the moon that can function indefinitely and begins storing genetic samples there. Before it is finished, however, an asteroid miles across enters the solar system from interstellar space on a trajectory toward earth that hides it until there is only a few days left. A handful of people escape to the moonbase where they prepare to clone themselves so that a new generation would be born over and over at moments to guide the reconstruction of the Earth.

Terraforming Earth follows nearly a dozen of these generations across millions of years. They're born and witness the earth at transition points, find that the Earth was murdered, and deal with their personal conflicts. The result is a set of linked stories that move quickly from period to period eventually leading to a pulp adventure where the clones face an evil empire of their descendants and a Cambellian story of the apotheosis of humanity.

As I mentioned I was taken with the premise from the beginning. The idea of generations of identical humans being born on the moon and the variations in their behavior through their unique experiences was intriguing to me. Coupling that with a plot of restoring the earth to life across millenia and I was hooked. Williamson follows on this for a little while but eventually things fall into a simple pattern. One person's clone consistently betrays the colony, they never attempt major variations in teaching or cloning multiple copies of the same person (something that always leads to a gender imbalance that affects the clones). No one lives to old age studying the effects and refining their methodology for better or worse. By the time it changes to a more pulpy adventure story it was a welcome change of pace even when it was not as strong as the original concept.

The characters Williamson creates are painted in broad strokes but it was effective for the purposes of displaying the similarities and differences when there were a dozen characters that were genetically identical. It did bother me that female characters were downplayed, there were two female scientists among the clones who do little more than hang off of their chosen lover.

By the time it was over I disappointed that the premise that I was enjoying had been lost for something weaker. If you're interested in the concept of generations of terraforming then you may find something worth reading about in Terraforming Earth.

Now for another chapter in the "It just bugs me" saga: it just bugs me when authors pander to their audience by creating characters who are Luddites for the period when the story is written. The most common example of this are people in a future where data readers will be a more efficient option going on about how great normal books are. Late twentieth century pop culture lives on through them even though the rest of the world has changed. Occasionally it goes so far that the future culture is presented as something ridiculous so that the Luddite main character that the reader is to identify with is clearly "right". It goes without saying that stories that present science fiction fans as better than other characters fall firmly under this (though that's a sin that "Millennium Babies" didn't commit). It's just pandering to the audience and being pandered to gets on my nerves quickly.

Thousands of people around the world got pregnant in March of 1999 with the intention of trying to have the first child born on January 1, 2000. Thirty years later the daughter of one of those women has come to resent her mother for considering the daughter a failure due to being born at 12:05 am instead of 12:01. A psychology professor interested in the consequence of being a failure from the moment of birth brings hundreds of these children together for a study and (for no conceivable reason) to work out their parental issues.

This story I hated. It's built on the premise that there's hundreds of people who have been wallowing in self-pity due to the time of their birth. Not just how their parents treated but them they've been obsessing over the exact second they left their mother's womb for thirty years. And they're suppose to be sympathetic rather than driving me to want to slap all of them senseless. And for no good reason as part of the psychological experiment the psychologist makes a minimal effort that somehow makes them get over it instantly.

It's trite at best. The story and characters are annoying and there isn't a thing here that was worth reading about. Actively avoid this story.

Children at a school live with mysterious patches of darkness which no light penetrates. Every unenclosed outdoor area and many sections of their school are filled with this gloom. A group of them find an inkblot like pattern behind the school's photocopier that cause anyone who views it to have muscle spasms and pain. They form a club daring each other to look at the pattern for longer and longer periods.

Langford isn't the first one two write about the concept of certain images being harmful to the human mind but he used it very effectively in "Different Kinds of Darkness". Children not recognizing the danger and using it as a plaything is exactly the kind of reaction I would expect in the situation. While I did not find the conclusion of his plot to be as effective I still enjoyed the story.
Posted by Das Übernerd at 5:18 PM