For the past twenty-five years comic creators have built a mythology around Batman and Superman being opposite ends of the vigilante spectrum. It's easy to build some superficial comparisons but I've never been completely convinced by the argument. Still mixing the two of them together has resulted in a lot of fun over the years. World's Finest was one of the most significant mixing of the two characters in years when it was released. Unfortunately as an adventure story it's dense, impenetrable, and uninteresting. The writing's opposite number is the artwork which is superb.

This story doesn't make a lot of sense so bare with me. There's an orphanage opened halfway between Gotham City and Metropolis which is replacing an orphanage in both of those cities for some reason. The Joker and Lex Luthor buy the old orphanages for some reason. Then Luthor buys the Joker's orphanage in exchange for a Metropolis vacation. There's a subplot about a guy who taught orphans to be thieves thirty years ago that never amounts to anything other than a vague plot twist that completely lacks meaning. Superman goes to Gotham City to follow Luthor buying land there and Batman goes to Metropolis to see what the Joker's doing. No one actually does anything until the Joker and Luthor decide they can't stand the sight of each other any more at which point they start blowing things up.

Here's what I wanted going into World's Finest: Superman and Batman to have a big adventure in which they join forces to deal with a threat. I wasn't expecting anything brilliant, just an excuse for some fun. What I got was a lot of talking about an orphanage, a "threat" that consisted of a land grab and acting goofy on the street. The villains had no motivation or even a clear concept which made the heroes seem less important. The heroes are barely in contact with each other anyway as they spend three-quarters of the story apart as they investigate a plot that is so ephemeral it doesn't seem to exist. There's little action and what action can be found isn't interesting.

Gibbons also makes a half-hearted stab at exploring the characters without really doing anything. The villains get the worst of this as they come across as almost identical mafia dons. When there isn't a lot of difference in methodology between the Joker and Lex Luthor there's something very wrong with their characterizations. Superman and Batman are at least differentiated but there it seems Gibbons goes too far in the other direction. There's one comically bad scene toward the beginning where the two meet at a party and have to act exactly opposite of each other. It's just after midnight so Batman says "Good evening" while Superman says "Good morning" for example. It's about as ham fisted as you can get without having your extremities grafted from a pig.

So instead of dwelling on the story which I can't stand and could pick apart for hours I'm going to jump straight to Steve Rude. Rude is easily my favorite comic book artist due to his sense of design. He creates these whimsical spaces for characters to occupy that look incredible on the page. And the characters that Rude draws have a sleek look to them that I enjoy. In World's Finest Rude indulges in a golden age look to the setting which just makes the whole thing more stylized.

I don't recommend World's Finest (at least this version of World's Finest; there have been dozens of things to use the title for Superman/Batman team ups). It's not even good as a superhero comic. It's only saving grace is the artwork and I'd recommend looking for Rude's art elsewhere. I've read worse but not often.
Posted by Das Übernerd at 5:12 PM

There is a theory that superheroes are a product of a bygone era which is why superhero comics are in such a decline. I'm not sure I agree with that since they can still draw a crowd to movie theaters but it's hard to argue that the simplistic worldview that allows for superheroes is completely at odds with the world today. There have been many attempts to shift the superhero to something more modern and I haven't been satisfied with many of them. Ex Machina is an exception. The series and concepts are firmly tied to the first decade of the twenty-first century. It captures the zeitgeist of today with a link to past superheroes in a fascinating package.

Mitchell Hundred was a civil engineer who found a strange machine attached to the pylons of the Brooklyn Bridge. When he touched the machine it merged with his head granting Hundred the ability to control machines and an inherent understanding of mechanical systems. He built a jet pack tried to be a superhero but quickly realized he couldn't make a difference like that. So instead he went into politics. Fate played into his hands as the one great deed he managed to do as a superhero occurred on the day of the mayoral primary and Hundred was swept into office.

Ex Machina is about that term in office which we are immediately informed will end in disaster. Mayor Hundred deals with the complications of being an independent mayor with no political base, skeletons in his closet, the usual raft of problems that the mayor of a large city has to deal with, and the fallout from his brief career as a superhero. The series kicks off with a serial killer murdering sanitation workers, a controversial art exhibit, gay marriage, and someone who has a connection to his own abilities.

Handling politics in comic books (well any pop culture, really) is usually done very poorly. It's rare for a creator to not present one side (the side they agree with, of course) as paragons of rationality and goodness while the other side are vile, reactionary monsters who are cynically harming the innocents for their own benefit. Even when I agree with the positions of the creator I find that kind of demagoguery obnoxious. Vaughan avoids that in Ex Machina mainly by presenting all sides as people who believe that they're right and doesn't show that anyone against Mayor Hundred is a fool. The initial political storylines are mainly about social issues but as the series goes on the politics become more murky and Hundred has to make compromises. It's not the most realistic depiction of local politics but it's a good one.

The plot of the series is the real selling point. There are layers of mystery as the series opens with a brief scene after Hundred's term as mayor before flashing back to just after his inauguration. It sets a pattern where tiny fragments of the overarching picture are revealed in flashbacks before returning to the main story. What gave Hundred his abilities and what agenda is it part of? What terrible secret does he have that the governor wants to use against him? What happened during his time as a superhero? It should come as no surprise since Vaughan is one of the writer/producers on Lost that he is very good at tantalizing the reader with those mysteries.

And I wound up being just as interested in the cast. Part of that is that Hundred is a very nerd relatable character. He's an engineer trying to engineer solutions to social problems and not always succeeding. He tried to be a superhero and found out why someone getting powers and putting on a costume isn't well suited to actually being a hero.

Tony Harris is an interesting choice for telling this story. While I was fine with his artwork on Starman it didn't blow me away. That mixture of human drama and superhero action seems to have primed him for Ex Machina where he's much better. He can show the tight action scenes that wrap up in just a few pages and then keep the momentum in the next twenty pages of talking heads. This might not be the ideal book for an artist to show off but Harris does some nice work.

I liked Ex Machina a lot. It's a smart, interesting take on the mixture of superheroes and politics. Vaughan has created a post-modern superhero that isn't about wallowing in how miserable his life is or how stupid the idea of being a hero is. This is the story of how a superhero might not be able to do as much as a man can without knocking down what came before.
Posted by Das Übernerd at 5:11 PM

In the mid-nineties Alex Ross gained a lot of attention as an illustrator. His work on Marvels got him his first Eisner. His second came when he provided covers for Astro City. 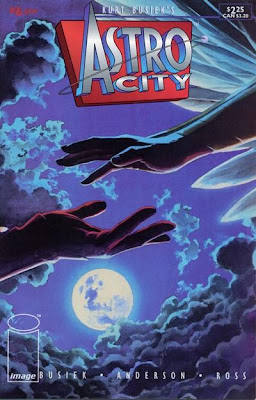 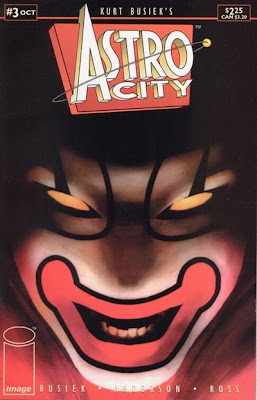 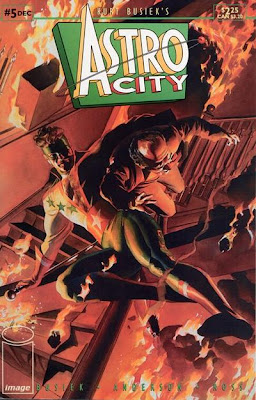 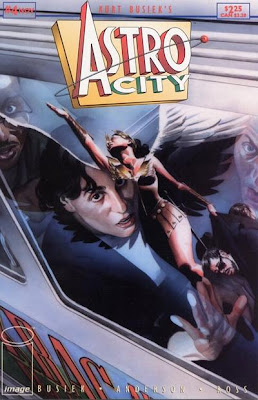 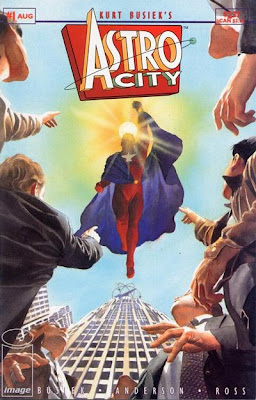