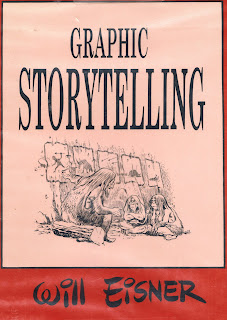 I went around a few times on how to review Graphic Storytelling. The fact is that I don't have an awful lot to say about it. I considered pairing it up with the next item in my reviewing stack and in the end I decided to just let it go and not be very long winded.

Graphic Storytelling is as a primer on narrative in comics. It's short, simple, and to the point and that point is exactly what it says in the title: understanding the narrative structure of comics. Remember your high school English class as you picked apart old novels? That's what you have here though instead of old novels it's typically short vignettes by Eisner to illustrate the point. He starts with the very basics of storytelling and talks about how comics interact with the reader. It's far from definitive; the book covers the basic outline of how comics as a medium interacts with storytelling and not must further than that.

Eisner has taught classes in on the comics medium and where Graphic Storytelling works well is when he is providing instruction. For example, he has a brief section on pacing comics like prose novels versus pacing them like film and provides a miniature tableau to demonstrate the difference. Most of the second half the book is like this. The flip side is when he attempts to catalog stories; Eisner spends a lot of time on the most primitive understanding of storytelling.

Graphic Storytelling is a thoughtful look at sequential art as a storytelling medium but not a deep one. Any major comic book nerd who has looked at the techniques in depth is probably going to find the book a bit too simple for them. On the other hand if you're interested in the narrative form of sequential art I can't think of a better introduction.
Posted by Das Übernerd at 8:02 AM 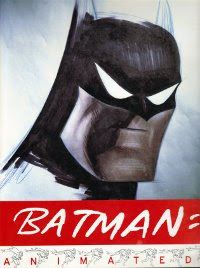 It's shocking to me that Batman: The Animated Series is close to twenty years old. When Batman started airing it was thin picking for comic book superheroes on the airwaves; Teenage Mutant Ninja Turtles was the closest you'd get and the only thing it had in common with the comic book was the title. So when Batman came along and managed the incredible balancing act of being a serious show about a superhero for children it was a revolution. I have never been a Batman fan and the animated series made me interested in him. Batman: Animated is not a history of the series even though it has a bit of that. And it's not a dissection of the production even if there's a bit of that in it as well. Batman: Animated is a celebration of series that set a yardstick for superhero cartoons and it does that very well.

The text in the book is minimal; there might be a paragraph or two on any given topic and I didn't find it very illuminating. If you've ever read an article on the series production then there's little in here that will come as a surprise. There's the expected gushing about the staff that Dini worked with, complaints about the network standards and practices, and the studio executives making unreasonable demands like making the the show about Robin. It's at its best when it goes into the details of the process but those glimpses are rare and fleeting.

What Batman: Animated has that makes it worth checking out is a wealth of art. If it's been drawn, painted, or sculpted for the series then there's a good chance that it's showing up in the pages. There's storyboards, key frame sequences, background paintings, model sheets, design sketches, color guides, and more. While it can't be all inclusive just due to space constraints it's hard to think that someone who likes the series will be unhappy with the book. While your favorite bit might not get featured there's bound to be another five things that you'll love included in its place. 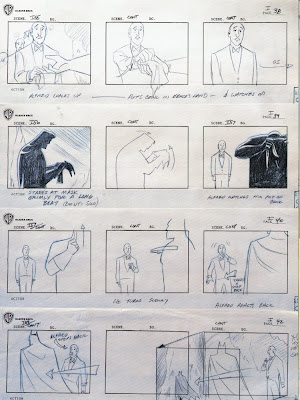 I do have a few insignificant complaints about the selections. A very large portion of the book are double page spreads giving a look at a villain or minor character. It's not that I didn't like these, it's just that the book is far too short which means that they take up a disproportionate amount of space. I wanted this book to be twice as long.

I'm also not fond of the production design. It is extremely busy and it can be hard to tell what captions are referring to. The titles for pages are in tiny text on thin red bars which can be hard to spot. There are multiple gatefold spreads inside the book but due to how the pages are structured the felt redundant. 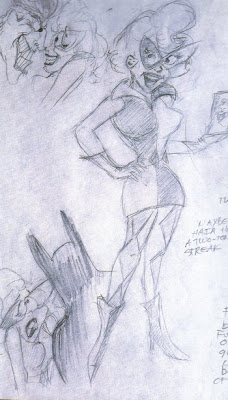 These are nitpicks, though. Batman: Animated is a wonderful collection of material and page after page holds some nifty treasure from the show. Sometimes it's a glimpse into what might have been like the original design for Harley Quinn or the redesign of Catwoman for an abandoned spin off, and sometimes it's the gritty details that are squeezed into the backgrounds. This book made me appreciate the art of the series even more.
Posted by Das Übernerd at 7:17 AM

Well the World Fantasy Awards have been handed out and there was a nasty surprise in them for me:

A tie! Well I'm looking forward to reaching each of those books and have my fingers crossed for something special from both authors.
Posted by Das Übernerd at 8:10 PM