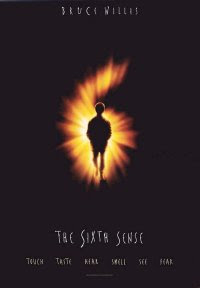 A wise man whose name I cannot recall at the moment once said, "All ghost stories are inherently optimistic." And he was correct since in each of them they contain the answers to questions that have troubled human minds since the very beginning. Not only is there life after death but it's similar enough to our own to be comprehendable and typically there is justice in the universe. Of course most ghost stories don't recognize this; they're too busy having the monster jump out at you. The Sixth Sense takes the viewer through the transition of these world views. While I wouldn't credit that philosophy with the film's success I can't help but think that it helps make it a better film.

For that guy stumbling across this who doesn't know The Sixth Sense, Bruce Willis is a child psychologist whose life collapses after he's shot by one of his former patients. He sees a chance for redemption in a young boy who shows all of the same symptoms of his original patient. That boy is hiding a secret that may be driving him mad and Willis attempts to reach him before it is too late (yeah, they gave away the secret in the trailer and it might be one of the most quoted movie lines in the past ten years but the pacing makes it clear that it was supposed to be a secret up to that point).

In 1999 the Hugo for Dramatic Presentation went to The Truman Show and if this was the path that future awards would take then I wouldn't be so bothered by the Nebula for scripts. The Truman Show is in my view a stronger movie as a whole; it owes its artistic success to the direction, acting, writer, and more. The Sixth Sense, on the other hand, in the narrower view of the best script has a clear advantage since the script is what made the movie great.

Looking at The Sixth Sense from the perspective of the script makes one thing very clear: it is the reason that the film was so successful. The thing people remember most about the movie is the ending and that ending would not work if it was not supported by that script. The direction and the acting work to support it (and if they were bad they would have undermined it) but the script is what mattered. I think it does harm repeated viewings even though most people will want to see it twice since so much of the film's plotting is built around that climax.

It's a bit sad that I need to say this but Haley Joel Osmet does a spectacular job playing the troubled young boy. Every time that a child actor doesn't ruin a movie it compels those commenting on the film to mention it. Oddly enough when Bruce Willis doesn't ruin a movie it doesn't compel people to comment on it but I will this time and mention that this is once of those rare instances where his flat, wry "acting" worked onscreen.

Similarly M. Night Shyamalan, who built his reputation as a director on this one success, has a sedate direction that doesn't harm the film but doesn't really make it memorable either. Everything in the film looks murky. That's an obvious stylistic choice but it doesn't make for an engrossing view. The movie in this case might have worked better a book due to that.

I'm not fond of everything else M. Night Shyamalan has made (yes, including Unbreakable; I thought it was four or five good scenes stuck with two hours of mediocre material), but The Sixth Sense is perfect. His directorial trademark plot development worked wonderfully the first time. I would not hesitate to recommend the movie to anyone.
Posted by Das Übernerd at 10:13 PM

I was putting together my Amazon order and thought to grab the first few books that won the World Fantasy Award. "Let's see how much it will cost for a hard cover..."

"Oh dear god. Okay, I've paid that much for a few other books to complete my Hugo and Nebula collection. Maybe they won't all be..."

Yeah. It's not happening soon.
Posted by Das Übernerd at 4:27 AM

I'd Say He Was Spinning in His Grave but...

...Mostly Harmless was not published posthumously.

A sixth book in the increasingly inaccurately named Hitchhiker's Guide to the Galaxy trilogy has been announced. Since Douglas Adams ascended to a higher plane of existence almost ten years ago the new book is by Artimis Fowl author Eoin Colfer. The new book is to be called And Another Thing and the only plot details available is that it will contain the same characters.

I've been listening to the radio shows on my commute lately and I enjoyed the early works by Adams quite a bit. However the Hitchhiker's Guide series is a text book example of the declining value of sequels and by the time you hit Mostly Harmless it's ready for bird cage lining. I have no desire to see the new book but given this and the Dune sequels and the Tolkien reworking (which has been going on for decades but there's a recent popular example to drive publishers forward) I am left wondering what dead SF author is next. My money is on Asimov since he's due for a revival and Heinlein has already had his share of posthumous mining.
Posted by Das Übernerd at 5:02 PM

I've been relaxing since finishing off my reviews of all of the Nebula winning novels but then this comes along.

(By the way, don't expect a lot of book reviews until I feel up to tackling the World Fantasy Awards and that may be a few months.)

Chris Sims of The Invincible Super Blog provided the world with the concept of Batman with Shark Nunchucks. Others took up the torch and gave us more options for things that Batman could tie together and beat people with. Now the challenge has gone out for anyone regardless of artistic talent to do the same.

So I thought to myself, "Batman is always prepared. What nunchucks would let him be always prepared?" The answer when it occurred to me was obvious. Batman might be prepared for anything but there is only one person who has actually dealt with everything. So I give you... 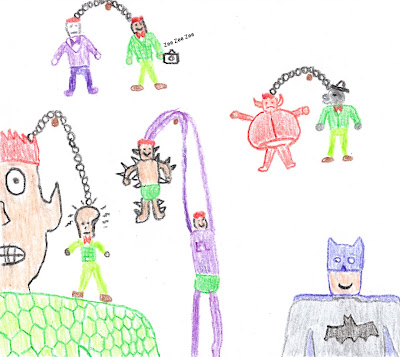 I had a few more I considdered using but I stuck to just ones in the recent collection The Amazing Transformations of Jimmy Olsen just in case this inspires someone like a crazy cover off a spinner rack.

I can't wait to see what other people come up with...
Posted by Das Übernerd at 7:48 PM