Last year I only discussed the three short fiction categories for the Hugo nominations. I'm going to expand things a little bit more this time around. I'm not going for all of the nominated novels or related non-fiction. I'm also not planning on the short form dramatic presentation category since I'm intentionally behind on two of the shows nominated (maybe as the summer progresses and I catch myself up on Lost and Battlestar Galactica). I have however read four of the six nominees in the graphic story category and have easy access to the remaining two. So I'm going to cover all of the short fiction nominees, the long form dramatic presentation, and graphic story categories.

First up are the short stories which demonstrate to us that if your story starts with any letter greater than "F" people just won't reach it when they're reading for nominees. All of the links will take you to a copy of the story. Here they are in the order which I read them:

“26 Monkeys, Also the Abyss” by Kij Johnson - This story is from that school of urban fantasy where something strange happens to give someone's life meaning. In this case it's a set of strange monkeys who perform an impossible disappearing trick. Their owner purchased the act for one dollar from the previous owner when her life was at its lowest point. There are two things that make this story more effective than most along these lines. First the style that it's written in is a disjointed set of notes that carries quite a bit of information. Also the reader gets some answers that add a touch of charm to its conclusion. I enjoyed the story quite a bit.

“Exhalation” by Ted Chiang - This might be my least favorite Chiang story which puts it on the level of good but not spectacular. In it there is a strange world filled with compressed gas driven automatons. One of them recognizes that something is changing within themselves or the world and undertakes extreme measures to understand. Once he does he finds that the nature of the universe is far more cruel than he could imagine. There's some direct global warming parallels in the story but this is not a story about environmentalism beyond the biggest of the big picture. Instead Chiang focuses on how understanding a small thing can change the fundamental understanding of the universe. The problem with this is that it means that the reader gets a lot of exposition. And when I say a lot I mean metric tonnes of it. The concepts raised are intriguing and the narrator's voice carries it well enough but this is not a very tight story and that's due to the quantity of data that has be thrown at the reader.


“Evil Robot Monkey” by Mary Robinette Kowal - This is an astoundingly short story; I haven't done a word count on it but I'd be surprised if it exceded a thousand. Still it's not imposssible for a good story to be told in that space; unfortunately "Evil Robot Monkey" isn't a very good story. There's a smart monkey who scults clay and swears at children who make fun him. That's almost the entire story right there. It comes across as one-tenth of a story rather than something complete. Characters exist only as the broadest outlines and plot is non-existant. There's not even an interesting prose style to give it some strength.

“Article of Faith” by Mike Resnick - For this short story a cleaning robot at a church is inadvertantly converted to Christianity by the reverand. For the first half of the story I thought that Resnick was going someplace interesting with the difference between faith and knowledge. I suppose I should say that I was surprised by the second half but the surprise was that anyone would write a story where robots were standing in as objects of human prejudices today. Those stories were stale in the 1950's when they were socially relevant; today it's just clumsy. Despite being a decent storyteller Resnick can't do much with such a worn out story. I found the initial philisophical questions raised much more interesting than the flat characters and when they vanished for a quick lesson that "Prejudice is bad" they couldn't carry it.

“From Babel’s Fall’n Glory We Fled” by Michael Swanwick - Swanwick's story also uses an ancient SF theme: two seperate aliens that cannot trust each other are forced together by circumstances to join together in order to cross dangerous territory. In this case it's a human from a libertarian distopia joining with an alien from a society that holds trust as the highest virtue. Together they're on the run from the destruction of the alien's city which was betrayed and they carry with them a library containing information beyond calculable value. What makes this story work is the ambiguousness of it; while both character's hold their society's values in great esteem they also recognize the limitations of it even before the story begins. So while it plays with the "learning about other cultures" theme there is an undercurrent that both already know those lessons. It also helps that the story has a unique viewpoint: a ghost AI that runs one a spacesuit. It's a subtle story that has some interesting layers and I appreciated it for that.

So my ballot would be: 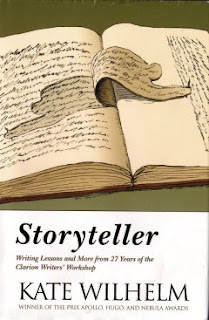 I really enjoyed Kate Wilhelm's Storyteller which won the 2006 Hugo award for best related non-fiction. It was both an entertaining writer's guide and history of her time teaching at the Clarion writer's workshop.

Small Beer Press, the publisher of Storyteller is currently selling copies of it for just one dollar to clear out their warehouse. It's a great bargain and they have several other chapbooks and anthologies similarly discounted. You can't beat that price for such a great book so I'd recommend grabbing it while they still have some.
Posted by Das Übernerd at 7:10 PM

Review - "The Night We Buried Road Dog", "Graves", and "A Defense of the Social Contracts"

There's one oddity that's worth noting before I get started. The 1994 Nebulas were the last time that the Hugos and Nebulas for short fiction shared two or more awards. In addition it would take until the 2001 Nebulas for the two awards to agree on any story. At the same time in the novel category there was a ten year long disagreement. So after here it is territory where the SFWA and SF fandom didn't agree.

1993 was a year for light fantasy; both of the unique winners that year could have easily dropped the fantastic element in the tale and still had most of the same concepts...

On the lonesome Montana plains during the early 1960's lived eccentric men who swear by their automobiles and pass rumors between them about a legendary wanderer who is only known by the name "Road Dog". One of these men starts an auto graveyard for burying beloved cars. When another has a strange face to face encounter with the Road Dog he flees the region but finds himself being drawn back for a confrontantion.

The plot itself in this story isn't much but Cady does a great job with character and mood. Instead of just being a collection of quirks Cady doesn't forget that they need to be interesting characters first. So while one of them may love cars so much he sets up memorials to them that isn't the only thing there is to him.

As for mood a big part of that is how well Cady establishes his own kind of Americana folklore. The souls of those who died at the roadside appear just off the headlights to distract weary drivers. Ghost cars roam the lonely highways late at night appearing from nowhere and vanishing in the distance. The mysterious Road Dog communicates through obscure messages left on rest stop toilet stall walls. The story borrows liberally from urban legends and uses them to good effect.

For a story about fast cars this is a very leasurely story. I think that works for its purpose, though. It's about men leading a lonely existance in the wilds of Montana where time passes slowly. Cady was so evocative in "The Night We Buried Road Dog" that I think it easily overcomes the less interesting plot. I enjoyed it quite a bit.

During the Viet Nam was there was a soldier assigned to body recovery and identification. An officer too flush with his own power demands that he go into the field to a firebase for immediate removal of corpse. Once there the soldier finds two bodies, an American and a strange looking tribesman and before he can investigate further he becomes caught in a firefight.

I know that he's just drawing on his experiences but Joe Haldeman captures the feeling of the military better than any SF writer out there. "Graves" puts that on full display and though it uses a lot of familiar cliches Haldeman can tell those and make them interesting.

This is a very short story and in this case it barely qualifies as fantasy. In fact the fantasy element is so light that I suspect it was applied just to sell the story to a magazine. Still it is well integrated; it doesn't feel like a bolted on monster thanks to the resolution in the last few paragraphs. I have my own theory about the nature of the story and since it would spoil things I won't go into it; I will, however encourage you to read "Graves".

In the future civilization has changed so that everyone registers their preferred sexual habits. The idea is so that there could be no deception when, for example, a polyamourous person meets someone looking for a committed relationship. When one woman falls in love with a man registered for in discriminant sex she schemes to force him to be monogamous.

This is classic SF in the "posit a strange thing about a society and explore the consequence" mold. I've got to say a society where sexual behavior is both incredibly open and enforced is an interesting one. The concept includes how the story is told; it is done as a cautionary tale that is remote and passionless. It results in one of those interesting situations where things the problems of our world are replaced with a new set of complications.

I understand what Soukup was doing with the style she chose for this story, I just found that it made it hard to be interested in the characters. I suspect that she wound up doing this because that main character is fairly unpleasant and disconnecting the reader from them would avoid "taking sides" in her argument. Either way the prose wound up being technically interesting but dull to read.

For that reason I cannot just recommend "A Defense of Social Contract". If you're like narratives with unique styles then you may enjoy the story but I think that it will fall flat for most readers.
Posted by Das Übernerd at 3:39 PM